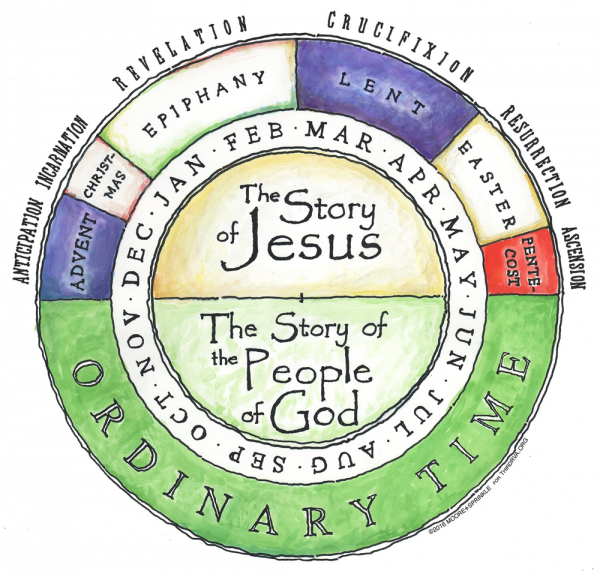 Part IV in A Series of Articles on our Liturgical Heritage

THE HOLY MEAL shared by Christians the world over is known by different names according to the theological emphasis any particular worship tradition wishes to highlight. The designations of Holy Communion, the Mass, and the Holy Eucharist are all correct and seek to communicate something of the community’s understanding of the sacramental event happening at the altar. Although known by different titles, the celebration of the sacrament has fundamental actions that are shared by all, namely, bread is taken, blessed, broken and given.

Those who wish to focus on the view that the faithful are drawn into a holy community by the sacrament prefer to use the title Holy Communion. Those who want to emphasize the atoning sacrifice of Christ, made present in the sacrament, refer to it as the Mass. The majority of parishes in the Episcopal Church nowadays prefer to use the title, the Holy Eucharist, from the Greek word for thanksgiving (although both Holy Communion and Mass are used by some). By so doing we highlight our thankfulness for the gift of the sacrament that binds us to God, the saints and one another and graces us with the presence of Christ among us and in us.

Even though it may be said that these variations of title indicate differing emphases, it is also true that they represent more fundamental differences in understanding in some cases. Many Protestant traditions, for example, conceive of the sacrament as a “memorial meal” in which the events of Christ’s death and resurrection are recalled by the gathered faithful and the gifts of his atoning work appropriated. These traditions believe that Christ is present in the sacrament only as the body of the faithful is gathered and that the bread and wine have no “objective” connection to Christ without the community of faith in attendance. Therefore, representatives of these traditions do not take the sacrament to sick or shut-in members of the community, but rather pray for them when they gather together, incorporating their absent members into the body of the faithful in and through prayer.

Others believe that Christ is present in the sacrament in some objective fashion and that through the mystery of the eucharistic action the bread and wine become the body and blood of Christ. The sacrament is therefore reserved in an ambry (a “wall safe” of sorts) in order to be taken to sick and shut-in members who have been prevented from attending worship. Roman Catholics seek to explain this mystery by using the language of Medieval Thomistic Scholasticism in the doctrine of transubstantiation. Anglicans are less specific in their explanation and in general hold the view that the presence of Christ in the sacrament is a mystery, believed by faith, but understood only by God. Some Anglicans are uncomfortable with trying to obtain too much specificity about the subject and either avoid it altogether or try to “ride the fence” between these two differing views.

However, even with these differences in emphasis or belief regarding the scope of Christ’s presence in the sacrament, throughout its history and development, the whole church has long understood the action of the sacrament to be a mystery that is characterized by unity. In and through the sacrament we are brought into communion with God, all those living and dead who have been joined to Christ through baptism (the communion of saints) and, in our case, those neighbors who gather with us at the altar at 120 West 69th Street.

When we gather for worship we come to offer our whole selves to Christ, our souls and bodies, to be forgiven, strengthened and renewed. Then we are sent back into the world to take up Christ’s work of redemption. There are no spectators at this event. We are all participants. That is why, when gifts of money, bread and wine, are brought to the altar to be presented to the priest everyone stands. When the Eucharistic Prayer begins the celebrant and the people exchange antiphonal greetings and then sing or recite the Sanctus, a brief prayer that echos the words of the heavenly hosts gathered around the throne of God revealed to St. John in his Revelation, a reminder that we join with them in our worship. The priest, on behalf of the gathered faithful, then continues the prayer to God which recounts the great deeds of God throughout history and recalls the words of Christ to his disciples in the upper room when he said, “this is my body, this is my blood.”

The act of making Eucharist is called a “celebration” because through it we recall the salvation which is ours in Christ, give thanks, and partake of his saving grace. Whereas baptism is the sacrament through which we enter Christian life, the grace imparted through the sacrament of Holy Eucharist strengthens us for the life of discipleship. Through it we are joined together with our Lord, the saints, and one another in order that we may grow yet more deeply in our sense of God’s presence with us, corporately and individually.