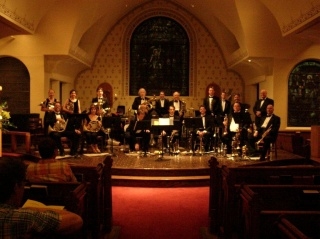 The Concert Rental Program is an outreach ministry of Christ & Saint Stephen's Church which rents out the church worship space at non-profit rates to musicians for rehearsal and performance as a way of supporting the development of music -- which so richly enhances our spiritual life.

The Christ & Saint Stephen’s Church worship space seats approximately 300+ guests, and is a beautiful venue for performances ranging from intimate solo recitals to chamber ensembles and more. Equipped with a concert-quality Yamaha S6 grand piano, it is also an excellent and acoustically-satisfying space for making recordings or hearing auditions. We welcome acoustic musicians of all kinds. For more information on upcoming performances, visit our Calendar of Music Events page.

If you or your group is interested in renting our church space for your concert, recital, workshop, recording, or rehearsal, please contact our Director of Concerts, Hannah Spierman by email.


Multi-faceted artist Hannah Spierman has garnered consistent praise, both for her vocal beauty -- her voice has been described as “a sweet, true soprano that falls most gratefully on the ear”, and her performance of Agathe’s lyrical Act III aria in Weber’s Der Freischütz with Bronx Opera was said to “soar to brilliant heights” -- as well as for her compelling stage presence. As Tormentilla in Ralph Vaughan Williams’ rarely-performed 20th-century opera The Poisoned Kiss (also with Bronx Opera), she was lauded by Opera News for offering “a bright characterization and some delightfully quirky line readings”, and for her “conviction and comedy” and for portraying “a three-dimensional human being.”

A frequent performer with the Bronx Opera, Hannah has also appeared with the company as Alice Ford in both Verdi’s Falstaff and Vaughan Williams’ Sir John in Love, Birdie Hubbard in Marc Blitzstein’s Regina, Countess Almaviva in Mozart’s The Marriage of Figaro, Musetta in Puccini’s La bohème, both Donna Anna and Donna Elvira in Mozart’s Don Giovanni, and Inez in the New York premiere of Die drei Pintos, a work begun by Carl Maria von Weber and completed by Gustav Mahler.

Hannah’s other recent New York-area appearances include Tatyana in Tchaikovsky’s Eugene Onegin, “English” comedienne Julia Jellicoe in Gilbert & Sullivan’s The Grand Duke, the title role in Gilbert & Sullivan's Princess Ida, Echo in Strauss’ Ariadne auf Naxos, and Alice Ford in Falstaff with Utopia Opera; a trio of roles in Puccini’s operas -- Giorgetta in Il tabarro, Nella in Gianni Schicchi, and Mimì in La bohème -- with Long Island's North Shore Music Festival; First Lady in Mozart’s The Magic Flute and Gertrude in Hansel and Gretel with Amore Opera; and concert performances as Echo and Donna Elvira with Opera Company of Brooklyn, Maria Boccanegra in Verdi’s Simon Boccanegra and Micaëla in Bizet’s Carmen with Sing Through Central, and the Second Spirit in Purcell’s Dido and Aeneas with the New Jersey Oratorio Society. Hannah has also performed regionally throughout the United States, most recently as Rosalinda in Johann Strauss’ Die Fledermaus with Oswego Opera Theater; Praskowia / Hannah Glawari (cover) in Lehár’s The Merry Widow with Northern Lights Music Festival in Minnesota's Iron Range; as Countess Almaviva with Opera Breve in Wichita Falls, Texas; and as Giorgetta with Buck Hill-Skytop Music Festival in the Poconos.

A graduate of the New England Conservatory, Hannah has been in demand as a soloist in both traditional and modern classical music. In Boston, she sang the American premiere of Israeli composer Osnat Netzer's acclaimed song cycle “Light Night Songs” and was featured as The Tourist in Robert Zimmerman's concert opera 9/11 Soliloquies; in New York, she sang excerpts of the title role in Elliot Encarnación’s new opera Lilith in concert at the Manhattan School of Music. In addition to her work as an opera and oratorio soloist, Hannah excels in ensemble singing. She has been a Staff Singer here at Christ & Saint Stephen’s since 2016, and has been heard contributing her voice to such varied institutions as American Classical Orchestra, Tanglewood Festival Choir, the Cathedral Church of St. John the Divine, and Congregation Kol Ami in White Plains. A skilled visual artist, Hannah also designs and creates bespoke press-on nails for drag queens (and anyone else who wants them). Her work can be viewed on her Instagram @nailsforqueensnyc. She also functions as administrative assistant and social media manager for Bronx Opera. Hannah was born in California, spent her formative years in Vermont, and currently resides in The Bronx with her husband and frequent artistic collaborator, stage director Benjamin Spierman