Sing psalms and hymns and spiritual songs among yourselves, singing and making melody to the Lord in your hearts... Ephesians 5:19

On Trinity Sunday of 2008, The Rt. Rev. Mark S. Sisk, Bishop of New York, dedicated Schoenstein organ to the Praise and Glory of God. The occasion marked a new beginning in the musical history of two of New York City’s oldest churches.

In 1793, Christ Church was founded as the first new Episcopal Church in Manhattan during the post-Revolutionary War period, followed in 1805 by Saint Stephen’s, the fifth. At that time the city was centered below 14th Street. A century later, when both congregations had settled on the Upper West Side, the residential center was already passing 72nd Street and by the early 20th century Manhattan was “built-out” to the northern-most reaches of the island.

In 1890, Christ Church was built on its fifth and last location at Broadway and 71st Street. Between 1801 and 1923, parishioners of Christ Church had purchased no less than eight organs from the outstanding firms of the day. The 1923 instrument was no longer in playing condition when the Christ Church building was torn down in the early 1980s after the parish merged with Saint Stephen’s in the mid-1970s.

Saint Stephen’s was much less adventurous and, by the time they bought what had been the Chapel of the Church of the Transfiguration on 69th Street in 1897, they had occupied only two buildings, but had purchased four organs, also from outstanding builders. When the Chapel was built by the Church of the Transfiguration (located on East 29th Street) in 1876, it featured an organ by Hilborne L. Roosevelt. Having gone through several, sometimes dubious, rebuildings, whatever was left of the Roosevelt, along with its additions and changes, was dismantled in December 2007, almost 130 years later!

It is appropriate that an instrument built by one of the most highly regarded builders of the late 1800s has been replaced by an outstanding example of an equally eminent builder of today. By the 1960s Lincoln Center had begun to transform the area into one of the greatest musical centers in the world, but the Roosevelt organ at Saint Stephen’s, suffering from deterioration and questionable rebuilding, hampered the quality of music there.

With the arrival of Robert J. Russell as Director of Music in 1973, the professional men’s choir was reorganized into an outstanding mixed choir and extensive use of our neighborhood’s rich resource of great instrumentalists to enhance the liturgical services began. At one time it included an early music group made up of outstanding instrumentalists, who, along with one of the country’s premier brass ensembles, were in residence at the parish. Original compositions were also encouraged for our use and composers, including Lee Hoiby, Bruce Neswick, Ned Rorem, Paul Turok, and Robert Lehman were given commissions for new works over the years.

In addition to its love of music, Christ & Saint Stephen’s has a long-established commitment to education. These two interests were combined in 1980 with the establishment of the Fellowship in Church Music. Graduate-level students were chosen to join the staff, assisting the Director of Music.

The goal of the Fellows apprentice-type learning of the craft of sacred music was two-fold: to give the student an opportunity to work in a unique liturgical music program with outstanding professional musicians, and to encourage their growth and development by utilizing their particular talents to enrich our music. The program has been an invaluable asset to the parish and brought Christ & Saint Stephen’s nationwide attention through its benefit to churches throughout the country as Fellows moved into the mainstream of sacred music. It would have been impossible to carry out the musical program Christ & Saint Stephen’s enjoyed without the presence, inspiration, talent, and dedication of the Organ Fellows.

You may recognize some of the names: Nigel Potts returned to Christ & Saint Stephen’s as Organist & Choirmaster from 2006-2015, and is now Organist & Master of the Music at Grace Episcopal Church in Charleston, SC; Dr. Dumschat is Organist & Choirmaster at The Church of the Transfiguration; Dr. Hamrick is involved in early music as well as contemporary opera and dance in the U.S. and Europe; Dr. Long is a widely-known recitalist and recording artist; the late Robert McDermitt was Assistant Organist at The Church of St. Mary the Virgin; and Bruce Neswick one time former Director of Music at The Cathedral of St. John the Divine.

In 2003, Robert Russell retired after thirty years as Director of Music and was succeeded by Paul Jacobs, who due to a demanding concert schedule became Artist-in-Residence at Christ & Saint Stephen’s. Following a year when former Organ Fellow Eric Eickhoff served as Interim Director, Nigel Potts was appointed Organist & Choirmaster in 2006, who worked closely with Paul Jacobs and Jack Bethards of Schoenstein & Co in planning the new organ. 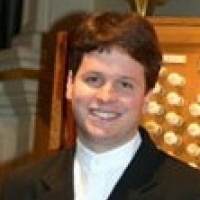 
Paul Jacobs made musical history at the age of 23 when, on the 250th anniversary of the death of J. S. Bach in 2000, he played the composer’s complete organ music in an 18-hour non-stop marathon in Pittsburgh. Today, Mr. Jacobs, hailed for his solid musicianship, prodigious technique and vivid interpretive imagination in performances throughout the United States, Europe, South America, Asia, and Australia, is widely acknowledged for reinvigorating the American organ scene with a fresh performance style and “an unbridled joy of music-making” (Baltimore Sun). In 2003 Mr. Jacobs was invited to join the faculty of The Juilliard School , and the following year, he was named chairman of the organ department, one of the youngest faculty appointments in Juilliard’s history.

Known for his “charismatic showmanship and unflagging exuberance” (Wall Street Journal), Mr. Jacobs possesses a vast repertoire spanning from the 16th century through contemporary times. He has performed the complete organ works of Olivier Messiaen in a series of nine-hour marathons in Atlanta, Los Angeles, Minneapolis, San Francisco, Seattle, Washington D.C., Chicago, where the Chicago Tribune called him “one of the most supremely gifted young organists of his generation,” and in New York, where The New York Times praised his “supple technique and vivid interpretive imagination.”

Following his debut at the Grand Teton Music Festival, Mr. Jacobs is embarking on a particularly noteworthy 2008-09 season, highlighted by debut performances with The Philadelphia Orchestra conducted by Michael Tilson Thomas, the San Francisco Symphony led by Yan Pascal Tortelier, the Phoenix Symphony conducted by Michael Christie, and the opening concerts of the Pacific Symphony’s new season with Mr. Jacobs dedicating the new Fisk organ at Segerstrom Concert Hall in a concert highlighted by world premiere of a new work for organ, brass, and percussion commissioned by the orchestra from Masterprize and Grammy Award-winner Christopher Theofanidis.

He reintroduced an unpublished prelude and fugue by Samuel Barber, performed only once in 1928, in performances in Philadelphia, Washington, D.C., Atlanta, Los Angeles, Vancouver, and in San Francisco, where he was presented by the San Francisco Symphony as part of their celebrations of the 25th anniversary of the orchestra’s Ruffatti organ. On December 10, 2008, the 100th birthday of Olivier Messiaen, Mr. Jacobs marked the occasion with the composer’s Livre du Saint Sacrement in Woolsey Hall at Yale University , Mr. Jacobs’s alma mater.

Highlights of Mr. Jacobs’s most recent season included performances throughout North America, including several in New York City: His performance of Olivier Messiaen’s 1984 magnum opus Livre du Saint Sacrement at the Church of St. Mary the Virgin in Times Square, was named by New York magazine as one of New York’s 10 best classical performances of 2007. This was the concluding event of three activities he presented as the recipient of Juilliard’s 2007 William Schuman Scholar’s Chair. He was also tapped by Juilliard for the conservatory’s fifth annual Jerome L. Greene concert, a series honoring the memory and legacy of one of Juilliard’s staunchest supporters and dedicated exclusively to the performance of 17th- and early 18th-century music and recently dedicated New York’s first Schoenstein organ at Christ and St. Stephen’s Church on Manhattan’s West Side, where Mr. Jacobs is the artist in residence.

Paul Jacobs began studying the piano at the age of six and the organ at age 13. At 15 he was appointed head organist of a parish of 3,500 families in his hometown of Washington, Pennsylvania. Mr. Jacobs studied at The Curtis Institute of Music , where he double-majored in organ with John Weaver and harpsichord with Lionel Party. At Yale University, where Mr. Jacobs subsequently studied organ with Thomas Murray, he received a Master of Music degree and Artist Diploma and was awarded several honors, including the Dean’s Prize, the Faculty Prize of the Institute of Sacred Music, and Yale School of Music’s Distinguished Alumni Award. Most recently, Mr. Jacobs was invited to join the Yale University Council Committee on the School of Music by University President Richard Levin.

Mr. Jacobs has captured first prize in numerous competitions, including the 1998 Albert Schweitzer National Organ Competition and is the first organist ever to be honored with the Harvard Musical Association’s Arthur W. Foote Award.

In addition to concert appearances and teaching, Mr. Jacobs has been a featured performer at national and regional conventions of the American Guild of Organists and performs frequently at festivals throughout the U.S. and abroad. He has appeared on American Public Media’s “Pipedreams” and “Saint Paul Sunday,” Bavarian Radio, Brazilian Arts Television, ABC-TV’s World News Tonight, Australian Broadcasting Corporation, NPR’s Morning Edition, and CBC Radio