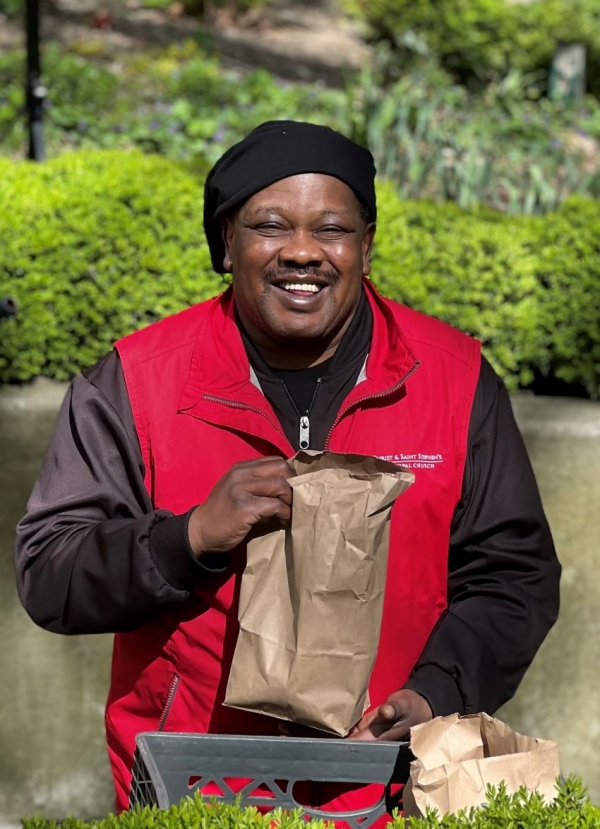 He took the seven loaves, and after giving thanks he broke them and gave them to his disciples to distribute; and they distributed them to the crowd. Mark 8:6

The Brown Bag program began in 1983 when hungry New Yorkers first began coming to the church asking for a sandwich. From a beginning of six small bags a day, we have increased our lunch program to serve an average of 79 people every weekday, including holidays. In 2008, more than 22,000 brown bag lunches were distributed.

Volunteers serve as director, treasurer, contact with food providers and fundraisers. Every other Sunday parishioners, often with Church School children working alongside their parents, help pack the bags needed for the next two weeks. Our annual appeal to neighbors and parishioners raises one third of our budget.

The people on our food line include homeless men and women; elderly neighbors, the working poor, and those recently laid off from their jobs. All are treated with courtesy; many are regulars who are greeted by name. We also distribute used clothing and make referrals to rehabilitation centers and other agencies.

We honor our our late long time sexton, George C. Johnson and the Rev. Martin Luther King, Jr. on the national holiday in Rev. King's name. It is a day of service where parishioners and volunteers gather to serve a yearly sit-down, hot lunch to our Brown Bag clients.

To help pack our Brown Bag lunches, join us in the Undercroft after Sunday worship. We pack lunches every other week after the 8:30 and 11:00 services. Schedule is subject to change.

For more information regarding volunteer opportunities, contact the Brown Bag Program at at 212-787-2755 ext. 5 or email [email protected].